The Jantar Mantar is an equinoctial sundial, consisting a gigantic triangular gnomon with the hypotenuse parallel to the Earth's axis. On either side of the gnomon is a quadrant of a circle, parallel to the plane of the equator. The instrument is intended to measure the time of day, correct to half a second and declination of the Sun and the other heavenly bodies.

Connaught Place is one of the largest financial, commercial and business centres in New Delhi, India. It is often abbreviated to CP and houses the headquarters of several noted Indian firms. The former location of the headquarters of the British Raj, the area's environs occupy a place of pride in the city and are counted among the top heritage structures in New Delhi. It was developed as a showpiece of Lutyens' Delhi with a prominent Central Business District.

The National Archives of India is the repository of the non-current records of the Government of India and is holding them in trust for the use of administrators and scholars. It is an Attached Office of the Ministry of Culture.

Parliament House is one of the most magnificent buildings in New Delhi which has one of the brightest clusters of architectural gems possessed by any country in the world. Visitors to the capital invariably pay a visit to this building as the two Houses of Parliament—the Lok Sabha (House of the People) and the Rajya Sabha (Council of States) are located within its walls.

Laxmi Narayan Temple, also known as Birla Mandir, is one of Delhi's major temples and a major tourist attraction. Built by the industrialst Sh. J.K. Birla in 1939, this beautiful temple is located in the west of Connaught Place. Birla Mandir The temple is dedicated to Laxmi (the goddess of prosperity) and Narayana (The preserver). The temple was inaugurated by Mahatma Gandhi on the condition that people of all castes will be allowed to enter the temple.

The National Museum in New Delhi, also known as the National Museum of India, is one of the largest museums in India. Established in 1949, it holds variety of articles ranging from pre-historic era to modern works of art. It functions under the Ministry of Culture, Government of India.

The splendour of the Rashtrapati Bhavan is multi-dimensional. It is a vast mansion and its archit picture is breathtaking. More than these, it has a hallowed existence in the annals of democracy for being the residence of the President of the largest democracy in the world. Few official residential premises of the Head of the State in the world will match the Rashtrapati Bhavan in terms of its size, vastness and its magnificence.

Mughal gardens are a group of gardens built by the Mughals in the Persian style of architecture. This style was heavily influenced by the Persian gardens particularly the Charbagh structure. Significant use of rectilinear layouts are made within the walled enclosures. Some of the typical features include pools, fountains and canals inside the gardens.

At the centre of New Delhi stands the 42 m high India Gate, an "Arc-de-Triomphe" like archway in the middle of a crossroad. Almost similar to its French counterpart, it commemorates the 70,000 Indian soldiers who lost their lives fighting for the British Army during the World War I. The memorial bears the names of more than 13,516 British and Indian soldiers killed in the Northwestern Frontier in the Afghan war of 1919.

The Teen Murti Bhavan (Teen Murti House) is the former residence of the first Prime Minister of India, Jawaharlal Nehru in Delhi, India, who stayed here for 16 years until his death on May 27, 1964. It was designed by Robert Tor Russell, the British architect of Connaught Place and of the Eastern and Western Courts on Janpath during the British Raj. Teen Murti Bhavan was built in 1930 as part of the new imperial capital of India, New Delhi

Safdarjung's Tomb is a sandstone and marble mausoleum in New Delhi, India. It was built in 1754 in the late Mughal Empire style for the statesman Safdarjung. The monument has an ambiance of spaciousness and an imposing presence with its domed and arched red brown and white coloured structures.

The DILLI HAAT provides the ambience of a traditional Rural Haat or village market, but one suited for more contemporary needs. Here one sees a synthesis of crafts, food and cultural activity. This Food and Craft Bazar is a treasure house of Indian culture, handicrafts and ethnic cuisine, A unique bazaar, in the heart of the city, it displays the richness of Indian culture on a permanent basis.

This unique museum has a fascinating and exotic collection of over 100 real size exhibits of Indian Railways. Static and working models, signaling equipments, antique furnitures, historical photographs and related literature etc. are displayed in the museum. 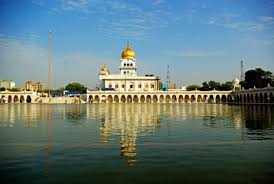 Gurudwara Bangla Sahib is one of the most prominent Sikh gurdwara, or Sikh house of worship, in Delhi, India and known for its association with the eighth Sikh Guru, Guru Har Krishan, as well as the pool inside its complex, known as the "Sarovar." It was first built as a small shrine by Sikh General Sardar Bhagel Singh in 1783, who supervised the construction of nine Sikh shrines in Delhi in the same year, during the reign of Mughal Emperor, Shah Alam II.