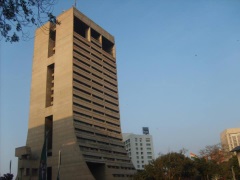 In 1911 the British Government decided to shift the capital of India from Calcutta to Delhi. On 12th December 1911, it was announced that Delhi would be the place of residence of the Viceroy and the new administrative centre. A Committee was constituted to select the site for the new capital. A number of sites were examined and finally Raisina Hill was selected for building the new capital of India. The English town planners led by Edwin Lutyens and Herbert Baker and others created the present New Delhi with avenues dominated by the palace of the Viceroy (now Rashtrapati Bhawan), Circular Pillar Palace, known as Parliament Secretariat building, green spaces, parks and gardens.

The construction of the new capital was a task of great magnitude. It was considered necessary that instead of leaving the control of construction and management to the local authority, a central authority may be entrusted with this work. This resulted in the formation of the constitution of the Imperial Delhi Committee on 25th March, 1913. This was the beginning of the New Delhi Municipal Committee.

In February 1916 the Chief Commissioner, Delhi, created the Raisina Municipal Committee. It was upgraded to a 2nd class Municipality under the Punjab Municipal Act on 7th April 1925. This Committee consisted of ten members appointed by the Local Government either by name or by office. In the first Committee so constituted five members were appointed ex-officio and five by name. For the first time public men were included to participate in the deliberation of local affairs/problems. On 9th September 1925, this Committee was allowed to impose tax on buildings and thereby the first source of revenue was created. The Chief Commissioner also transferred many administrative functions to the civic body whose income and expenditure grew noticeably.

On 22nd February 1927, the Committee passed a resolution to the effect that the name “New Delhi” be adopted and this Committee was designated as “New Delhi Municipal Committee” which was approved by Chief Commissioner on 16th March, 1927.

On 15th February, 1931, the new capital was officially opened. In the year 1932, the New Delhi Municipal Committee became a 1st class municipality. It was entrusted with supervisory powers to look after all the services and activities it was called upon to undertake.

In the year 1916, this municipality was discharging the responsibility to cater only to the sanitation requirements of the workers engaged in the construction of the new capital. From 1925 onwards, the functions of the municipality increased manifold. In 1931 functions in connection with buildings, roads, sewers, medical and public health arrangements were transferred to the Committee. Further in 1932 works of Electricity distribution and Water supply were also transferred to this civic body.

During the last ninety years of its existence, this Civic Body has grown into an organization with the responsibility of beautifying the city and providing civic services. This civic body has always laid stress on quality of service. During this period the Municipality provided an underground sewer system in the whole of its area. There were a number of open Nallas, which had become breeding grounds for malaria. All big open nallas have been covered and reclaimed land has been utilized for construction of public utility services as well as greenery.

The New Delhi Municipal Committee (NDMC) was superseded in February 1980. Thereafter an Administrator headed it till the introduction of new Act in May 1994.

In May 1994, the NDMC Act 1994 replaced the Punjab Municipal Act 1911 and the Committee was renamed as the New Delhi Municipal Council. The Act has been passed by the Parliament. The Central Government appointed a Special Officer under Section 418 of NDMC Act 1994 till the nomination of the Members. The 1st meeting of the Council took place on 23rd Dec. 1995.